WHAT'S THE WORST THAT WILL HAPPEN?

Getting caught committing fraud means you just pay the money back, right?
The truth is, these little white lies lead to BIG CONSEQUENCES.

Fraud isn't a game. Prisons don't accept get out of jail free cards!

Fraud is the intentional manipulation of the truth for financial or personal gain. What you might think of as a little white lie, may in fact be fraud that could result in a prison sentence and loss of your career.

What Does Fraud Mean to You?

You may not think about it every day, but fraud affects your life more than you may realize. Learn how to protect yourself in the latest animated shareable video from the ACFE.

Why Do People Commit Fraud?

Explore how pressure, opportunity and rationalization — called the Fraud Triangle — can come together to influence an individual to commit fraud.

Incorrect. Fraud is a crime that can result in a prison sentence.

Correct. Fraud is a crime that can result in a prison sentence.

HOW CAN I HELP?

Please help spread awareness of the BIG CONSEQUENCES of fraud. Follow us and post on social media using with the tag #COSTofFRAUD. For example, share and comment on articles about the big consequences of fraud (e.g., someone being sentenced to a prison sentence or losing their professional license) and link to COSTofFraud.com.

Fraud costs organizations worldwide an estimated 5 percent of their annual revenues, according to a study conducted by the Association of Certified Fraud Examiners (ACFE). The ACFE’s 2018 Report to the Nations on Occupational Fraud and Abuse analyzed 2,690 occupational fraud cases that caused a total loss of more than $7.1 billion.

The seriousness of the global fraud problem is why the Central Ohio ACFE Chapter announced its participation in International Fraud Awareness Week, November 15-20, 2020, as an official supporter to promote anti-fraud awareness and education. The movement, known commonly as Fraud Week, champions the need to proactively fight fraud and help safeguard business and investments from the growing fraud problem.

The Central Ohio ACFE Chapter joins hundreds of organizations who have partnered with the ACFE, the world's largest anti-fraud organization and premier provider of anti-fraud training and education, for the yearly Fraud Week campaign.

During Fraud Week, official supporters will engage in various activities, including: hosting fraud awareness training for employees and/or the community, conducting employee surveys to assess levels of fraud awareness within their organization, posting articles on company websites and in newsletters and teaming up with local media to highlight the problem of fraud.

“The latest statistics tell us that fraud isn’t going away, and companies that don’t have protective measures in place stand to lose the most,” Dorris said. “That’s why it is reassuring to me to see so many businesses, agencies, universities and other organizations involved in the Fraud Week movement. The first step in combating fraud is raising awareness worldwide that it is a serious problem that requires a proactive approach toward preventing it.”

“Since our first Fraud Week almost 20 years ago, the movement continues to grow,” Dorris said. “I heartily thank all of the supporters of Fraud Week for making it what it is today.”

For more information about increasing awareness and reducing the risk of fraud during International Fraud Awareness Week, visit FraudWeek.com.
The 2018 Report to the Nations is available for download online at the ACFE’s website: ACFE.com/RTTN. The Report is in PDF format.

HOW CAN I HEAR FROM A CONVICTED FRAUDSTER?

The Central Ohio Association of Certified Fraud Examiners (ACFE) Chapter hosted a BIG CONSEQUENCES Training Event on November 12, 2019 at the Ohio State University Fawcett Center.
Convicted fraudster Jerome Mayne shared first hand experience with the BIG CONSEQUENCES of fraud. Jerome pled guilty to committing fraud and received a 21-month federal prison sentence.
In addition to the quote in the above photo, another powerful message was how he helped his children understand how long he was going to prison, "I'm going to be gone for two Santa Clauses."
We will also have a convicted fraudster speak at the 20th Annual Emerging Trend in Fraud Investigation & Prevention Conference on May 18th and 19th at the Greater Columbus Convention Center. Mark your calendar. Registration coming soon. Click here for additional details.

WHERE DID THIS CAMPAIGN COME FROM?

The winning group was made up of the following participants:

This team presented their campaign idea with the following original artwork drawn by Miranda Gray.
One of the other groups came up with the messaging we used on this site of “Fraud isn’t a career, it ends careers.” This group was made up of the following participants:

Lamar Advertising then assisted our Board in bringing this campaign to life through creating poster designs.

Now we need your help. Help spread awareness of the BIG CONSEQUENCES of fraud. Post on social media using with the tag #COSTofFRAUD. 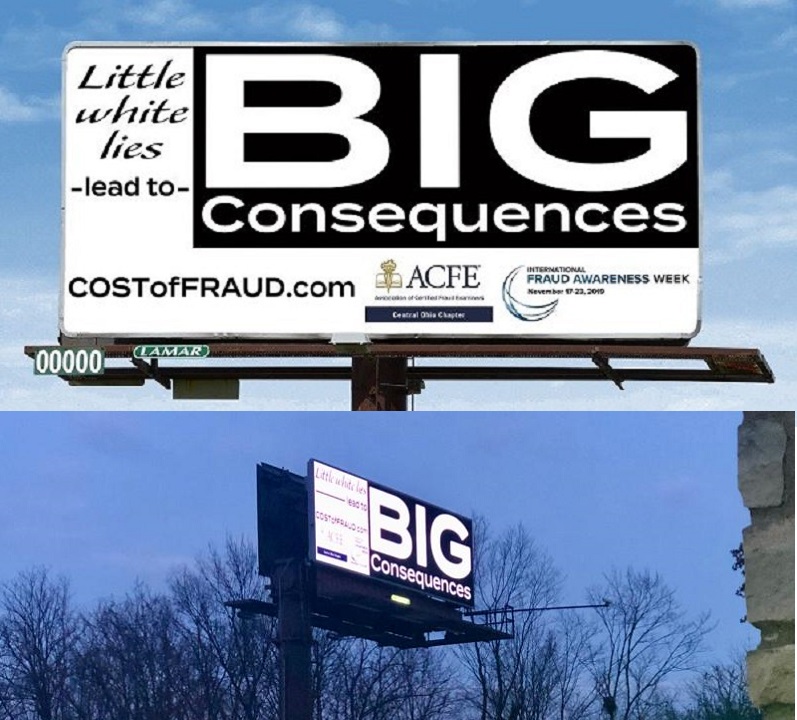 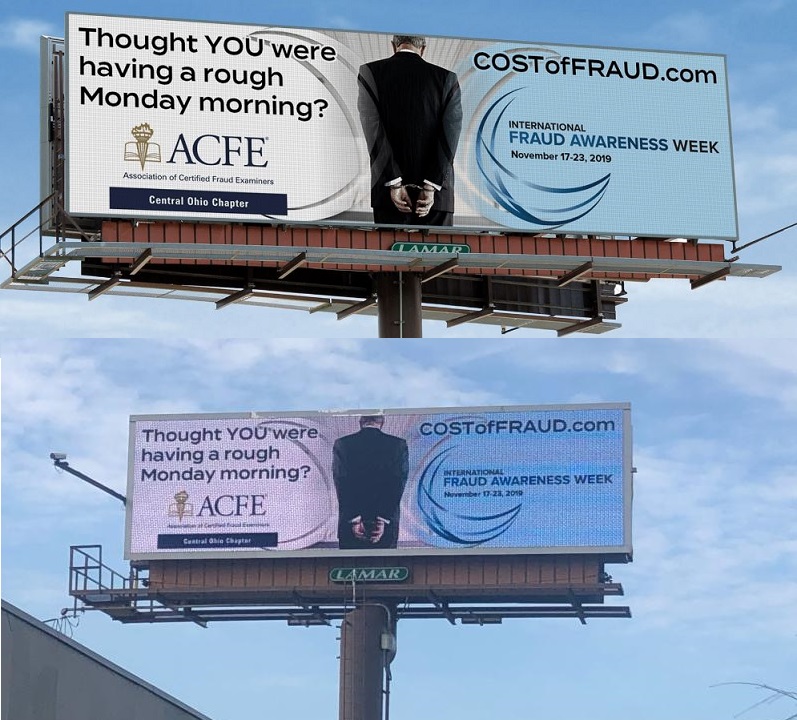 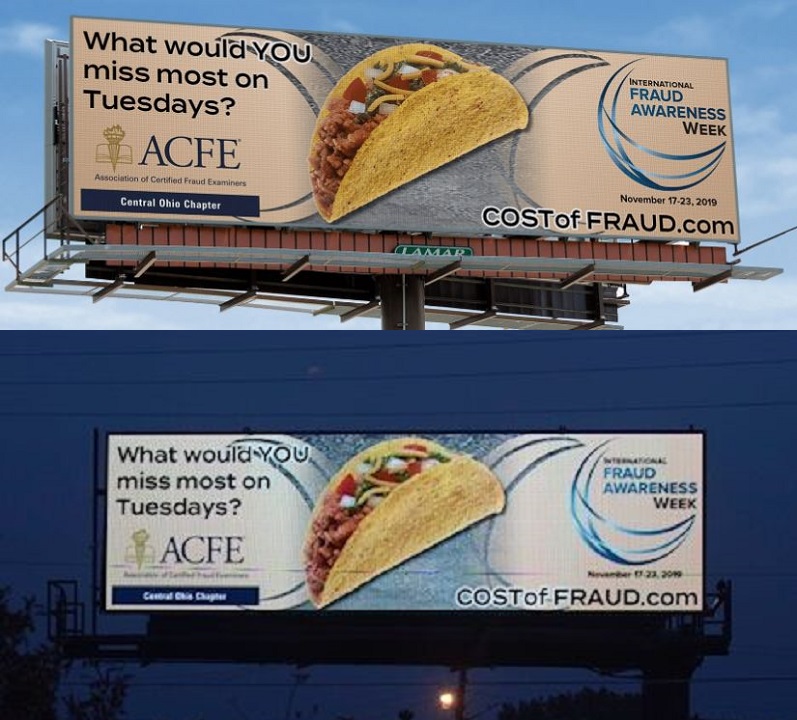 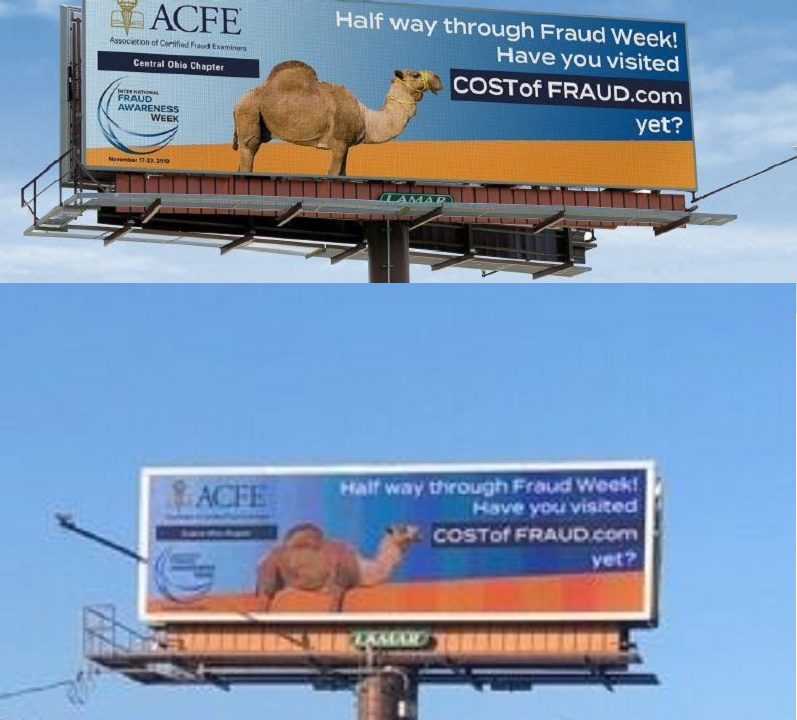 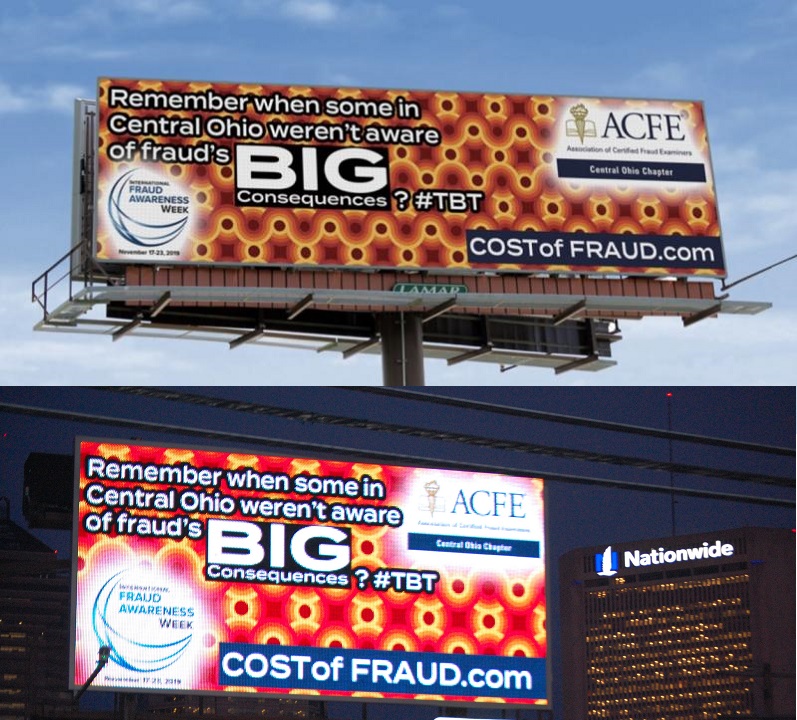 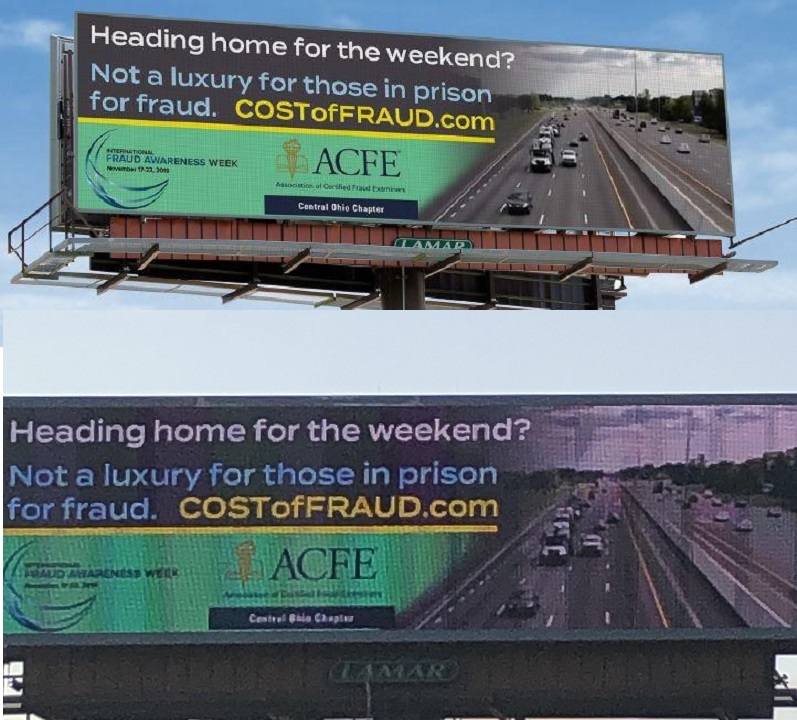